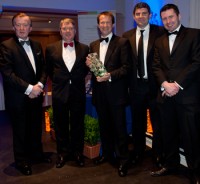 was recognised at the Irish Franchise Awards with the Innovative Marketing Award over the development and marketing of Club Cartridge Green, described as an unlimited ink subscription service, reports the Franchise Magazine.

Director of Franchising Nik Healy commented: “This is a great recognition for an Irish product, conceived, developed and launched in Ireland and now about to go to our first international markets.

Club Cartridge Green was introduced to its stores in 2011 and has now been expanded to an online service, with the company aiming for over 10,000 subscribers by November 2012.

Healy spoke on the future plans for the company, with Cartridge Green now looking for franchise owners across the UK: “We have a great team of people across our 13 stores at present and we hope to roll out an additional 16 over the next two years, as well as having our first presence in Britain.

“Cartridge Green was always going to be more than an ink refill business. We set out to change the model for printing and this award is testament to the progress we are making.”