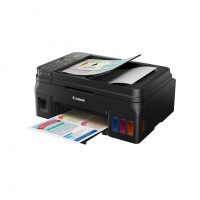 Forbes tested and reviewed the new ‘MegaTank’ technology, recently launched in the US market.

The site tested and discussed the PIXMA G4200 wireless AIO, which was launched alongside a host of other MegaTank machines earlier this month and which the OEM said features a “built-in refillable ink tank system” making it “easy for users to monitor ink levels and refill when needed”. The “bottles’ spill-resistant tops” mean the system is “designed to provide seamless and clean usability at home and in the office”.

Forbes’ writer noted that they have “always had good luck with Canon printers”, having been invited to test the G4200 and its “liquid dye-based ink” with yields of 6,000 pages in monochrome and 7,000 pages in colour. The article noted that “that’s generally about a year’s worth of ink, for most people”, and “realistically even more”, with the writer adding that the machine was “pretty lightweight and also has a relatively small footprint”.

With set-up said to be “fairly breezy”, the writer noted that “there’s not much to it” in terms of refilling, as “you install the printheads and fill in the four tanks with liquid ink”, with Canon said to have “pretty much [made] the process spill-proof”, as “you don’t squeeze each ink bottle until its nose is buried into the reservoir”. The process took “maybe four minutes”, with the ink tanks featuring “windows on the front of the machine” for checking levels.

The main issue with the device was the wireless connection, with “bizarre instructions” included in terms of connecting the printer to the computer and networks, which made the writer feel “a little vulnerable in the interim”. Their perspective was that “with the huge supply of ink”, the range means users “shouldn’t have to even lift the hood for quite a while”.