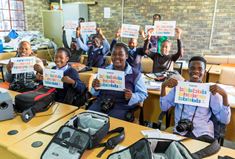 On 25 September 2018 Canon Europe marked the anniversary of the United Nation’s Sustainable Development Goals along with thousands of individuals, organisations, and institutions across the globe.

Canon Europe marked the third anniversary of those SDGs by celebrating Global Day to #Act4SDGs on 25 September with a special event in Nigeria in collaboration with Slum Art, a charity organisation with a mission to mentor and build creative talents in young people from Lagos. During the event, and over a course of two weeks, photography training will be given to participants aged between 15-19 from three neighbourhoods in Lagos with the aim to give these young individuals the skills to be able to talk about the SDGs that are most important to them and the solutions they want to see through the art of visual storytelling.

The event forms part of Canon’s Young People Programme and will be hosted by fully certified trainers from Canon’s Miraisha programme.

“The Young People Programme is good example of how Canon Europe is seeking to make meaningful social investments across the EMEA region, demonstrating our commitment to our corporate philosophy of Kyosei: living and working together for the common good,” says Stuart Poore, EMEA Director of Sustainability and Government Affairs, Canon Europe.

Now in its fourth year, Canon’s Young People Programme seeks to contribute towards the achievement of the SDGs by giving young people a voice through harnessing the power of positive visual storytelling to drive change. The programme uses the SDGs as a framework to give young people the opportunity to talk about the global issues that affect their futures and by providing the right tools and coaching, it aims to bring participants’ stories to life. Canon Europe has been delivering visual storytelling workshops for young people to date in 23 countries across Europe and has run events reaching more than 3,000 students. 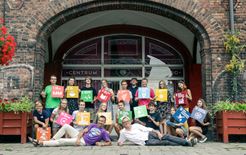 “If we want to make the SDGs happen, we need everyone to take action. Through our work with Canon Europe we are giving young people an opportunity to get involved in the issues they care about, to tell their own stories of SDG Action and share them with the world, and to join the global movement making the SDGs happen.” said Marina Ponti, Head of the Global Campaign Centre, UN SDG Action Campaign.

Key programmes throughout EMEA for Canon’s 2018 Young People Programme so far include;