Software services and document solutions company films its first viral advert, in which printers are destroyed to demonstrate common frustrations among consumers. 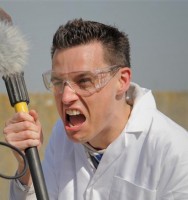 on the production of Bytes Document Solutions’ (BDS) new advert campaign, Ihateprinters.co.uk, which involved six of the company’s staff members being filmed “smashing up printers with axes and sledgehammers” and partaking in a “paint fight” to highlight the frustrations many printer users have, and to promote how BDS believes that its managed print service can help to resolve these issues.

Darren Spence, Managing Director of Bytes Document Solutions commented on  the reasons behind his advertisement idea: “If you ask the average office worker or IT professional what they think of their printer, they’ll tell you that on many occasions they have wanted to smash it up.

“People just want their printer to work but the devices have a habit of breaking down at the most inconvenient time, such as just before a document deadline or concurrently when every other printer in the building decides to stop working.

“Our managed print service fixes these frustrations so we felt a film featuring some of our people smashing printers to pieces with axes and sledgehammers was apt and long overdue […] No longer should the office printer control our lives.”

The advert was filmed on a derelict farm in Surrey using “eight production-quality HD cameras and one slow-motion camera” and was released on the company’s website on 13 April.