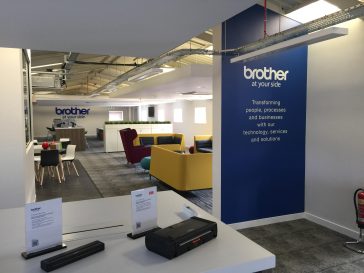 The OEM is among 230 organisations to have picked up the award this year, marking the second year it has been so honoured in the sustainable development category.

It cites the driving force behind its success as being its ethos “built around ‘doing the right thing.’”

Dedicated to “empowering staff, working with local communities, business continuity planning and being environmentally responsible,” Brother UK has bolstered its commercial performance as well as its sustainable development practices in recent years, “meeting key requirements of the Award’s eligibility criteria.”

Phil Jones, Managing Director of Brother UK said, “We’re delighted to win a Queen’s Award for Enterprise for the second time – the ultimate recognition for our commitment to sustainable development, one of the highest awards you can win in the country recognising organisations with long-term capability.

“Our fundamental purpose is to make the people and businesses we work with more successful, more quickly, which, in turn, has made our own business sustainable and adaptable over five decades.  I’m so proud to be leading this company at this most significant time, and for it to be recognised with this most prestigious award as we celebrate our Golden anniversary year.”

The Queen’s Award is not the only sustainability achievement Brother UK has been able to report, as it celebrates its 50th anniversary this year.  The OEM is one of only a handful of organisations to achieve “Investors in People ‘Platinum’ status”; and has also managed to send zero waste to landfill for the 8th consecutive year. In addition, Brother UK has continued its annual reductions in fuel usage and continues to utilise renewable energy on site.

A team from Brother UK will travel to Buckingham Palace this summer to receive the Queen’s Award for Enterprise, which will be presented to them by one of Her Majesty’s Lord-Lieutenants. The award “will be valid for five years.”