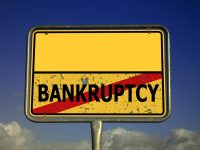 Proceedings to wind up the Champforgeuil-based company began in January.

The French company has filed for bankruptcy, following the opening of judicial reorganisation proceedings on the 11th of January, with the date of cessation of payments coming two days earlier.

Bourgogne Laser specialised in the repair of computers and their peripheral equipment.

The news was announced by the Tribunal of Commerce for the Châlon-sur-Saône commune in the East of France.

It is the second French company to bring the final curtain down in as many months, following the closure of Proton in February, after its annual turnover became unsustainable.