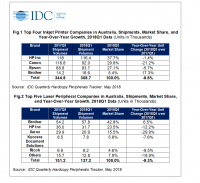 New data from the IDC for Q1 of 2018 shows a litany of negative performances, year-on-year.

The Australian hardcopy peripherals (HCP) shipments fell 8.8 percent year-on-year in the first quarter of 2018 to 446,000 units, according to the IDC Asia Pacific Quarterly Hardcopy Peripherals Tracker. Both laser and inkjet markets have contributed to the decline, reducing 8.6 percent and 9.3 percent year-on-year respectively.

The laser printing industry continues the downward trend, which was primarily driven by the sales volume loss of low price-band models. Combined shipment of copier-based and printer-based laser declined by 8.8 percent year-on-year, while fax-based laser fell sharply (-72.1 percent year-on-year) and its share is now less than 0.3 percent in the laser market, evaporated two-third in a year.

Most key players displayed a negative year-on-year performance in varying degrees during Q1 2018. For inkjet printers, Canon dropped over one-fifth of its shipments since Q1 2017, as their focus shifted higher value models. Brother and HP Inc. filled the gap left by Canon, increased their inkjet market share by 1.2 percent and 2.8 percent respectively.

For laser peripherals, Fuji Xerox experienced a decline of 30 percent as they are still trying to recover from top-level executive and board resignations after the accounting scandal. HP Inc., Ricoh and Kyocera Document Solutions were consistent with the shrinking market. Brother, in contrast, took share from competitors and posted positive year-on-year growth of 6.5 percent, hence strengthening its position in the laser market.