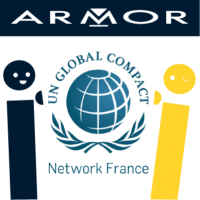 The Nantes-based company has been a member of Global Compact France for the past decade and has now been appointed to the UN organisation’s Board of Directors.

As Armor explains, the Global Compact is an organisation which unites companies, UN agencies, professional entities and other organisations “around 10 universally recognised principles”, with the goal of creating companies that are both more stable and more inclusive.

“By becoming a Board member of Global Compact France, Armor is continuing its societal commitment,” explained Hubert de Boisredon, CEO of Armor, who has chosen to place societal innovation at the centre of his company’s business model.

As a result, Armor reveals that the company now plays an active role in the implementation of the strategic axes of the UN.

The first of these axes involves supporting the signatories in the implementation of the 10 principles. Another axis is to promote the integration of Sustainable Development Objectives (SDOs) into companies’ strategies through partnerships. In addition, the Global Compact France aims to support companies in their diversity, in particular SMEs and VSEs.

Finally, according to Armor, the organisation “strives to be a platform for information and exchange of practices on corporate social responsibility.”

Armor has stressed its commitment to deploying renewable energy solutions as part of the fight against climate change, developing its own photovoltaic film and investing in the circular economy model with the production of its remanufactured OWA laser cartridges.

The company has also developed its own SolFree process for the manufacture of solvent-free thermal transfer ribbons.

The UN’s Global Compact currently consists of 76 local networks, including the French one, which unites almost 1,200 companies – including Armor – and over 100 non-profit organisations.