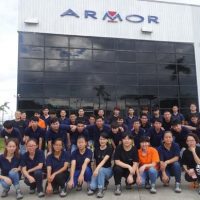 Armor’s team outside the new factory.

The company’s slitting plants in China have transferred to Zhuhai from Xiaolan, a week earlier than planned.

As a result of the move, Armor China described itself as “now fully operational” in Zhuhai.

“I am pleased to announce that we have been able to complete the move of the plants one week ahead of schedule and with a minimum of disruption for our customers, thanks to the excellence of the people participating in the project. I offer my sincere thanks to everyone involved and for the high level of synergy between staff in China, Singapore and France, whose efforts have enabled us to achieve this outcome,” said Wesley Alves, Armor’s Vice President of Operations for Asia.

Alves added: “We can now declare that ARMOR China has reached a higher level and I am certain that we will remain on this course of continuous improvement, innovation and professionalism!”