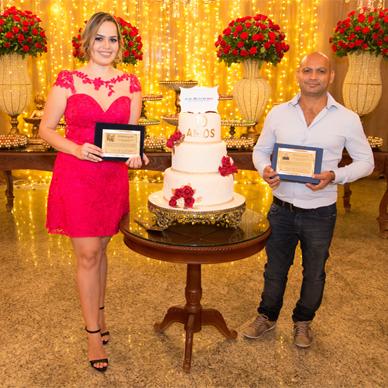 On 7 December 2017, ARMOR Brazil celebrated its tenth anniversary in grand style with a special dinner and dancing.

To mark this special birthday, a dinner dance was organised for employees and their families.
Strategically located in the city of Manaus, the company’s Brazilian plant started its operations in July 2007. First production took place on January 18th, 2008, with the aid of “still present employee Wanderley Ribeiro.”

Since then, the company revealed that it has “surpassed its annual goals”, acquiring “more and more participation and confidence in the national market and in South America”, while at the same time “not forgetting the values of the group, which are undoubtedly the main reason for the success of the company in the Brazil during the last 10 years.”

During the birthday celebrations, long-time employees Elis Conde (Administrative Manager) and Wanderley Ribeiro were both honoured for their 10 years of commitment to ARMOR Brazil.