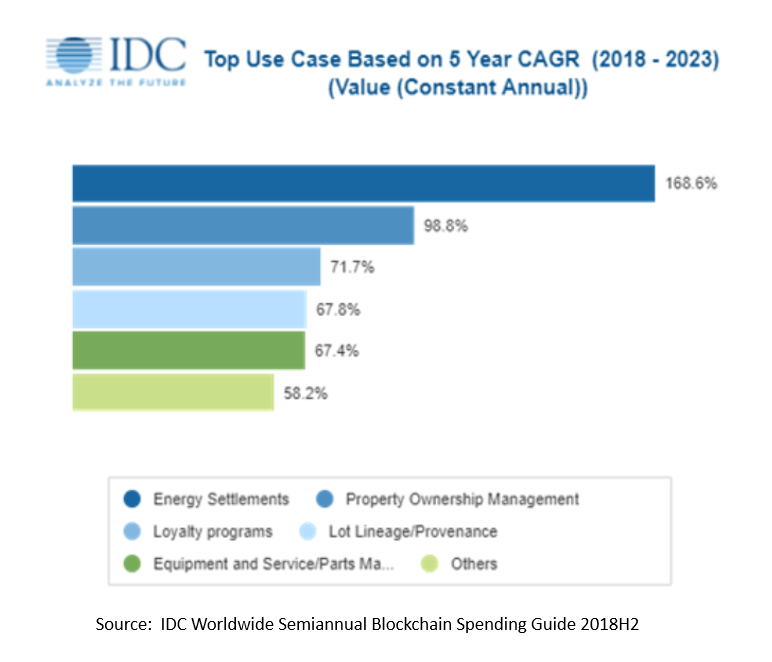 Asia Pacific’s (excluding Japan) spending on blockchain solutions to reach $522.7 million (€477.7 million) by 2019, an increase of 81 percent over 2018 [$289.48 million (€264.55 million)], according to the latest IDC Worldwide Semiannual Blockchain Spending Guide. IDC expects Asia Pacific blockchain spending to grow rapidly throughout the 2018-23 forecast period with five-year compound annual growth rate (CAGR) of 59.8 percent with a total spending of $3 billion (€2.74 billion) by 2023.

“Blockchain will revolutionise business, but it’s going to take bit longer, because blockchain is not a ‘disruptive’ technology, which can attack the traditional business models with a low-cost solution and overtake the incumbent firms quickly. Blockchain on the other hand is a foundational technology: It has a potential to create new foundation for our economic and social system. But while the impact will be enormous, it will take decades for blockchain to seep into our economic and social infrastructure,” said Ashutosh Bisht, Senior Research Manager at IDC Asia Pacific. “The process of adoption will be gradual and steady, not sudden, as waves of technological and institutional change gain momentum.”

Asia Pacific contribute around 19.3 percent of the overall worldwide spending on blockchain in 2019 and is ranked third in terms of spending, topped by US and Western Europe. Over the forecast period, People’s Republic of China (PRC) will see phenomenal spending growth with five-year CAGRs of 65.7 percent, while Asia Pacific will record 50.3 percent CAGR, respectively, with PRC contributing to about 68 percent of all blockchain spending in APeJ.

“The blockchain trend has been erratic for the past couple of years. With the hype of cryptocurrencies saturating, we can expect to see the underlying technology being utilised. In the next months, we will be unveiling in our IDC FutureScapes predictions how and where blockchain technologies will be heading for the next five years,” said Jeff Xie, Senior Market Analyst, IDC Asia Pacific.