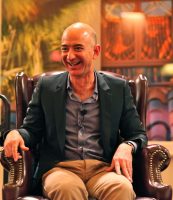 The CEO of the e-commerce titan has discussed the rise of third-party sellers on the platform, in his annual letter to the company’s shareholders.

The letter, reported in full by CNBC, discusses a wide-range of topics, including the development of Amazon’s Echo and Alexa systems, and the $15 (€13.30)-an-hour minimum wage paid to the company’s workers.

It is Bezos’ comments on third-party sellers which will provoke particular interest, however, among the remanufacturing and aftermarket community.

The letter includes figures showing the rise in share of physical gross merchandise sales by independent third-party sellers over the last two decades, climbing drastically from just 3 percent in 1999 to 58 percent in 2018 – comfortably more than half.

Most of these independent third-party sellers are small and medium-sized businesses (SMBs), according to Bezos. He acknowledges that in the same time period, first-party business has grown “dramatically”, from $1.6 billion (€1.41 billion) in 1999 to $117 billion (€103.5 billion) last year, a compound annual growth rate (CAGR) of 25 percent – still far lower than the third-party sales CAGR of 52 percent. In comparison to eBay’s third-party CAGR of 20 percent over the same period, it is an even more impressive feat.

He states that there are many reasons, but one “extremely important” factors was that Amazon “helped independent sellers compete against our first-party business by investing in and offering them the very best selling tools we could imagine and build.”

“There are many such tools, including tools that help sellers manage inventory, process payments, track shipments, create reports, and sell across borders – and we’re inventing more every year,” says Bezos. “But of great importance are Fulfillment by Amazon and the Prime membership programme. In combination, these two programmes meaningfully improved the customer experience of buying from independent sellers. With the success of these two programmes now so well established, it’s difficult for most people to fully appreciate today just how radical those two offerings were at the time we launched them.”

The CEO explains that his company invested in both of these programmes “at significant financial risk and after much internal debate. We had to continue investing significantly over time as we experimented with different ideas and iterations. We could not foresee with certainty what those programmes would eventually look like, let alone whether they would succeed, but they were pushed forward with intuition and heart, and nourished with optimism.”

The third-party remanufacturing community has not always enjoyed a smooth relationship with the online retail platform, however, with increasingly frequent – and successful – attempts by OEMs to remove listings from aftermarket companies, on the grounds of patent infringement.

The most recent example of such behaviour came last month, with Canon – a constant crusader for its intellectual property rights – filing a Report Infringement Form with Amazon.it regarding cartridges offered for sale by Global Trading di Mario Capuano. The product in question was removed from sale by Amazon in response.