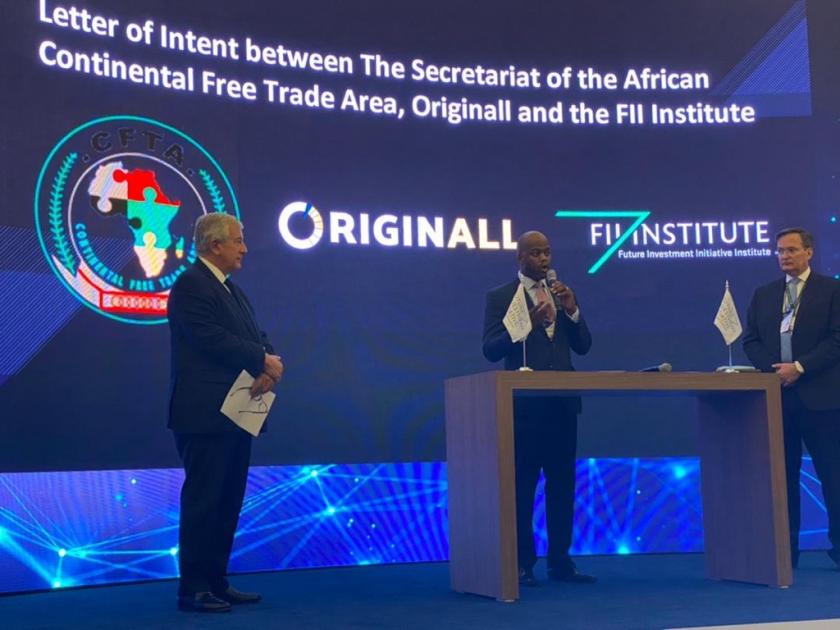 This historic partnership is aimed at securing over 1.2 Billion people and 55 nations from counterfeit and illicitly traded products, and will be launched during the Future Investment Initiative in Riyadh.

The Secretariat of the African Continental Free Trade Area (AfCFTA), the Future Investment Initiative (FII) and OriginAll S.A. announced a partnership representing a historic effort and opportunity to harness their respective strengths in an effort to eradicate counterfeit and illicitly traded products from the AfCFTA nations.

The cooperation is expected to benefit over 1.2 billion people, protect the national interests of the 55 AfCFTA nations and the safety and wellbeing of their citizens. AfCFTA said that the initiative will deprive criminal, terrorist and disruptive structures from one of their main sources of revenues, changeling back billions of dollars into the region’s legitimate economy.

“Counterfeiters and illicit traders have been taking advantage of our continent for centuries, depriving our nations from substantial revenues, fostering corruption and costing the lives of hundreds of thousands of African citizens every year. This can no longer be tolerated, it needs to stop, and it must stop now. We must put our national interests and the safety of African citizens first,” said H.E. Wamkele Mene, Secretary General of the AfCFTA. “I am proud to be at the forefront of this initiative and grateful to our friends in the Kingdom of Saudi Arabia for standing by our side during this historic moment,” the Secretary General added.

Richard Attias, CEO of the FII Institute commented: “This initiative fully embraces our vision and mission, representing a concrete, unprecedented and decisive action to bring together experts and innovators with the power to shape a more prosperous and safer future for the African continent. May this be a strong start of a global movement to eradicate the world from counterfeit and illicitly traded products and its deep-rooted consequences.”

OriginAll will serve as the bridge to harness this highly fragmented environment and provide a single window, for business, government, and consumers to identify and verify the authenticity and conformity of any product sold within the AfCFTA. Starting with the integration of existing traceability solutions, regardless if imposed by nations or adopted by brands, the “OriginAll Africa” team will work with the AfCFTA leadership to develop a roadmap in harmony with the various industry sectors to ensure a smooth implementation, the Secretariat explained.

“This initiative will channel critical resources back into the AfCFTA economies and contribute to the wellbeing and safety of AfCFTA citizens. By next year, counterfeiting is projected to cost the global economy up to $ 4.2 trillion – somewhere in between the GDP of Japan and Germany, or about 2.5 times all defense budgets of the world combined. These funds are primary sources of revenues of criminal, terrorist and disruptive structures and a major enabler of corruption. We all share the blame for letting this problem get out of control and losing visibility over its complexity and have a joint responsibility to address this global economic and social disease. We are immensely privileged to be part of this initiative and to work with innovators and visionaries such as H.E. Wamkele Mene and Mr. Richard Attias. To our hosts and the visionary leadership of the Kingdom of Saudi Arabia, we owe our gratitude and appreciation,” stated Hans Schwab, Co-Founder and CEO of OriginAll.

The agreement was brokered by the African Union (AU) and was initially signed in Kigali, Rwanda on 21 March 2018. AU member States have continued to show interest in this continental project.

To date, the Agreement has been signed by 54 out of 55-member States.