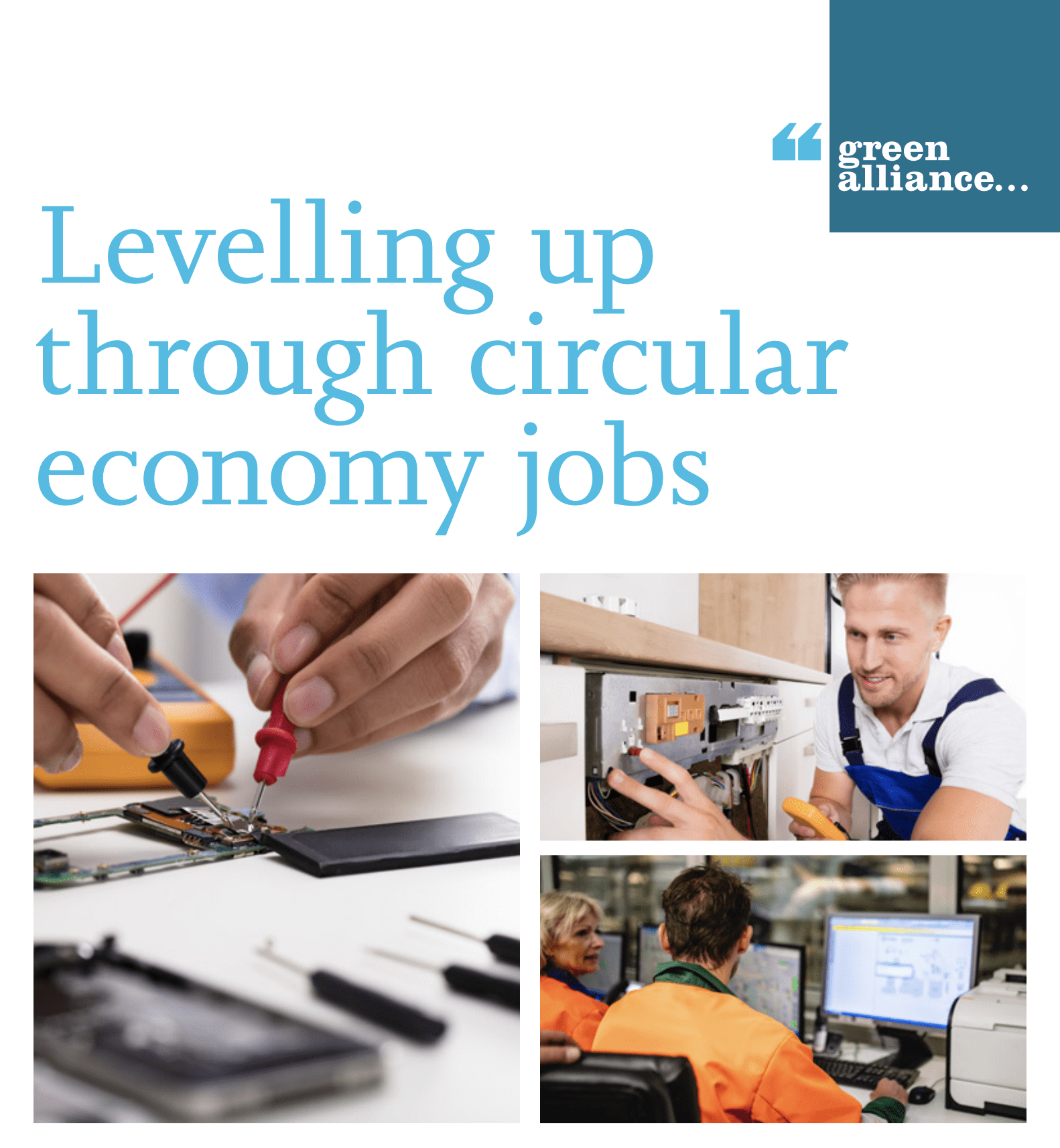 A thinktank says the UK could create 320,000 jobs through increased remanufacturing and recycling.

Increasing reuse, repairing and remanufacturing and increasing the recycling of throwaway items could create hundreds of thousands of new generation jobs across the UK, the Green Alliance thinktank has found.

The UK government has committed in law to net zero emissions by 2050. The think tank says this “will bring huge opportunities for new industries and economic growth” and deliver “new high quality jobs.”

The Green Alliance report found that prioritising the repair, reuse and remanufacturing of manufactured goods could create over 450,000 jobs in the next 15 years.

In 2019 only 1% of used goods were remanufactured. Adopting the reports transformational strategy by increasing remanufacturing requirements to 50% by 2035, the UK government could create 312,000 jobs, the report said.

Throwing away expensive products like iPhones, which are shredded for material recycling and often exported, fails to reflect its actual value and the carbon dioxide emissions arising from the energy and materials that went into its manufacture.

Repairing or refurbishing complex goods such as electronics and machinery could create 92,000 highly skilled jobs. For instance, repairing a used iPhone will retain around 48% of its original value, whereas this figure as recyclate is just 0.24%.

Lower skilled jobs could be created if the government focused recycling efforts on materials such as plastics if they were processed locally. In contrast, plastic waste has for years been exported overseas, where it is often just dumped or burned.

The UK is one of the biggest producers of plastic waste globally. In the post Brexit era, the UK continues to permit the export of thousands of tonnes of waste to developing countries. However, this was banned in the EU from 1 January this year. Instead of exporting waste, the think tank says the UK should value resources and invest in the infrastructure needed to re-purpose manufactured goods.

UKCRA, the UK trade body for printer remanufacturing, commented on the report: “Although not specific to the imaging equipment industry and the consumables they use, there are very compelling reasons in calling for a proactive approach in building the circular economy.

Cartridge remanufacturing has been leading the way for decades in implementing and advancing the concepts of circularity with carbon savings up to 7kg by using a remanufactured printer cartridge rather than a new one.

Even now, it is struggling with questionable strategies and approaches by OEMs (Original Equipment Manufacturers) designed to prevent reuse and remanufacturing through new design features such as moulded sides (rather than screws as in the past) and embedded chips. These are purposely intended to obstruct components from being replaced that would allow printer cartridges to enter the circular economy.

The report by Green Alliance calls for the UK government to raise ambition and to drive towards improving the ways in which valuable resources are used and creating jobs. UKCRA agrees with that, but goes further, and calls for common sense in the way we operate our economies – with a pro-active effort to stop anti-reuse measures and to permit reuse and remanufacturing to flourish.”

Static Control commented on the report: “We support the UK government in promoting a circular environment. The UK taking actions to grow the remanufacturing sector between 20%-50% could give much-needed help to remanufacturers, whose businesses have been squeezed in recent years by cheap, new build alternatives and the OEMs. We believe this plan could help further grow the industry, provide jobs and open opportunities for remanufacturers.”

Reuse – the direct reuse of a product to preserve as much of its value and embodied carbon as possible. For example, a reused iPhone retains around 48% of its original value, whereas this figure as recyclate is just 0.24%.

Repair – extending the lifetime of products by repairing them instead of throwing them away.

Remanufacturing – disassembling used products into components for repair and reconditioning to restore performance and quality to new product specifications.

Servitisation – moving away from product-based to service-based business models. Examples are frequently business to business, such as Rolls Royce renting engines to airlines based on the amount of time an engine is used in flight.

Closed-loop recycling – secondary materials are processed to create a new product of the same or similar value. For example, bottles made from PET being recycled and remade back into PET bottles.

Using taxes – The report suggests that the UK government could stimulate consumer demand for reuse, repair and remanufacturing by zero rating VAT on repairs and refurbishment instead of the current VAT rate of 20% for repairs. When combined with labour costs, it can make buying new items cheaper than repairing them.

Our take on this: The report is a refreshing read and signposts what could be delivered using a circular economy. The challenge is for everyone in the UK market to hold the politicians accountable and ensure they deliver.