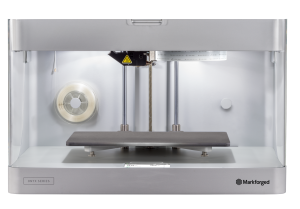 The printer manufacturer, which has its base in Boston, USA, has revealed it will be opening its first European headquarters in Dublin, generating 100 new jobs.

Markforged, which first launched in 2013 and specialises in producing “affordable machines that print high-strength materials”, as the Irish Times reports, is embarking on a programme of global expansion. The opening of its Dublin HQ is part of this programme.

Although Markforged has not yet discovered a permanent Dublin base, the company will currently be based in Iveagh Court. Four staff from the USA will be moving to Ireland “to assist in setting up the office for the first two years”, headed by Stephen Barbuto, EMEA Director of Commercial Sales.

“We started looking at Europe about a year ago,” explained Darcey Harrison, who serves as Vice-President for Sales, Services and Partnerships at Markforged.

While other locations were considered, including cities in the UK and Netherlands, Dublin was decided on due to several factors, such as its “proximity to the US office”, the “technical talent” in the region, and “its location in relation to” Europe, the Middle East and Africa.

While the company has said this move will generate 100 new jobs in the next 3 years, further jobs could also be available later on, with Harrison stating, “We are very open to increasing the size of the office”.

IDA Ireland is supporting Markforged’s transition to the country.

The company seems to have made its move at a propitious time for the 3D printing industry, with a new report revealing that the 3D Printing Filament Market looks set to blossom between 2018 and 2023.