3D printer emissions are cause for concern 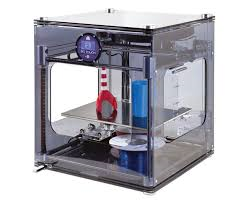 The growth in the 3D printer market is raising concerns about the “potential negative health effects” arising from the inhalation of volatile organic compounds, as c&en reports.

While the US government has already “set workplace standards for a few of the VOCs released by 3D printers” these apply to industrial settings and concern “healthy, working-age adults”; meaning these hazardous compounds are not regulated in places such as homes and libraries, where children could come into contact with them.

In addition, there is not enough knowledge currently available about “most of the compounds” emitted by these kinds of printers.

“Scientists know that particles and VOCs are bad for health, but they don’t have enough information to create a regulatory standard for 3-D printers,” says Marina E. Vance, who works as an environmental engineer at the University of Colorado in Boulder.

In addition, as Rodney J. Weber, an aerosol chemist at Georgia Institute of Technology, explains, data amassed from early studies of 3D printer emissions “are difficult to use in developing standards because of variability in test conditions”.

“By this fall we will put out an ANSI [American National Standards Institute] standard for measuring particles and VOCs for everyone to use,” she said.

3D printers operate by “feeding coils of plastic filament through a nozzle that melts the plastic at temperatures up to 320°C and then extrudes it onto a moving baseplate.”

“We know that when you melt plastic at high temperatures, the long chains of organic matter in the plastic partially degrade and release potentially harmful volatile organic compounds and ultrafine particles (UFPs) into the air,” said Brent Stephens, working as an environmental engineer at Illinois Institute of Technology.

Along with other researchers, Stephens discovered that “the most common filament materials can cause potentially unhealthy emissions when used in 3D printers.” These include styrene and formaldehyde, the latter being a known carcinogen, as well as caprolactam, which is a respiratory irritant.

Finally, all filament types emit UFPs, tiny particles which “can penetrate deep into the lungs and enter the blood stream”, causing respiratory and cardiovascular diseases.

The formulation of the filament and the temperature to which it is heated are critical to generating particles and VOCs, Weber explained. “The higher the temperature, the more gases are produced, and the more particles that ultimately form,” he stated.

Filament additives can also have an impact on emissions.

When the ANSI/UL printer testing standards are put in place in the autumn, “they will also include a voluntary threshold for allowable levels of emissions from 3D printers.”

“For VOCs there are lots of existing standards for specific compounds such as formaldehyde, styrene, and caprolactam,” UL’s Black commented.

UL’s approach is likened, in the article, to that taken by Germany’s Blue Angel, which set standards for laser printers.

“The maker space from which 3-D printers come is pretty innovative, so I feel optimistic that we will reduce exposures to harmful aerosols,” Stephens concluded.