3D house being built in Netherlands

The house is the dream child of Dutch architect Janjaap Ruijssenaars, who has a firm in Rotterdam, Universe Architecture. The modern concept was not “designed with 3D printing in mind”, 3D Print reported 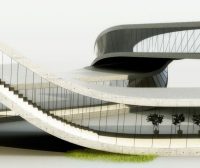 , but Ruijssenaars realised that 3D technology could build his dream quicker, and decided to work with the Royal BAM Group to design a massive automated 3D printer to build the house.

BAM alleges that their 3D printer “is the first of its kind where free-form print technology is linked to automotive industry robiotics” and it was developed through teamwork with Acotech, a robotics company in Eindhoven. The design of the house is in the form of the Mobius Strip, a surface that gives the illusion of only having one side and one boundary, and with its half twist it gives the illusion that it is endless.

The 3D printer uses techniques comparable with inkjet printers in that it allows a “bonding liquid to be applied to sand” which then quickly hardens into the shape required. Both stone and concrete can be printed, and the printer also has the capabilities for making “steel and insulation materials”. The robotic invention can be fitted with caterpillar tracks, allowing it to travel and it can recycle its own “materials and waste” so that the concrete can continue being used.

Rutger Sypkens, of BAM Bouw en Techniek, commented: “As well as the form freedom, we are also very much taken by the circular process. Concrete granulate and pre-existing prints can serve as a raw material for the machine at a later stage.” At €4 to €5 million ($5.3 to $6.7 million), the house is not cheap, but the hopes are that eventually the new technologies will become widespread and used for more construction.

Ruijssenaars said: “It’s fantastic that we have jointly conceived a machine that can make something new. This was much more commonplace for architects during the Renaissance.”